The  Waione property has been farmed by the Wilkie family since the mid-1920's, an original 100ac's share-milked by my grandfather, Robert, added to by my father Donald, and doubled further by me more recently. 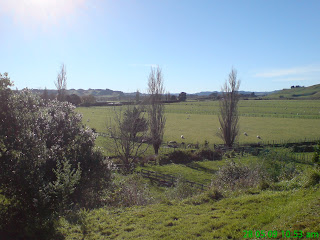 The word Waione is taken from the maori language, and infers a 'sandy beach', which has no relevance to this farm situated in the lower Whangaehu Valley, actually about 10km as the crow flies from the Tasman Sea.

It just happened Waione was where my mother came from near Rotorua, it sounded nice, and we needed a nicely clipped name to register for a stud prefix. 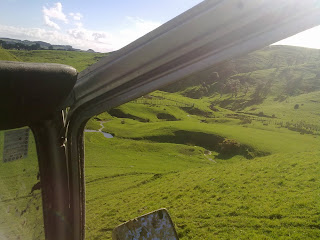 The farm is about 1/4 valley floor, the balance rolling to easy hill, rising to a majestic 250' asl
But, we still get to see in a 360 deg panorama, (on a fine day), clockwise from north, Mt Ruapehu, the Kaimanawa, Ruahine, and Tararua ranges, D'Urville Is, sometimes some of the South Island, Kapiti  Is, and finally to the west, Mt Taranaki.
The Whangaehu River headwaters at Mt Ruapehu, in fact shedding the Crater Lake, so I've seen a couple of lahars in my time, and flooding is a regular occurrence.
Annual rainfall is around 30-35 ins, 8-900mm.
Its not a bad place to live, hours of sunshine second only to Nelson, Wanganui City 15 mins, Palmerston North 40 mins, you can be clicking on the skis on Ruapehu in 90 mins, or sitting down to a show in Wellington in 3 hrs.
Auckland's about 5 hours away if you dont stop for a break, but who wants to go there. 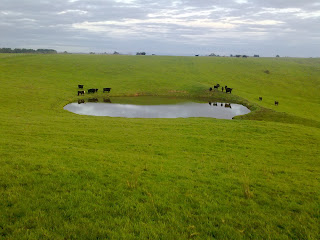