Rusty Firth was one of my favorites, left this earth a few years ago now, but his writings are well worth catching up on if you can run down either of his two books.
In 5th Dimension he mentions the importance of buying yourself a toy, at least once a year (Rusty had a trailer-sailer).
The great thing about farming is you can incorporate your toying into your business, and so it is with my latest machinery acquisition. 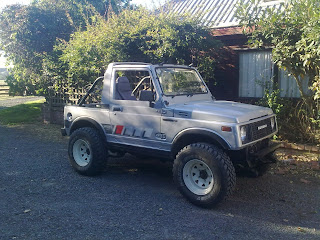 For the last almost 3 years I've been running a Chinese made ATV. Its been a real lemon, seldom able to make it to the next service interval without a serious repair, I'm on the 3rd rear diff, 3rd rear driveshaft, 2nd front diff, a couple of electrical fixes, and now the fan motor has seized, and the gearbox has dropped its oil. So, the search was on for a replacement, and from TradeMe, this is what I came up with, and settled on. Its a 1986 Suzuki J413 body on a 1992 Samurai chassis, 1600cc Escudo motor, auto gbox, crawler transfer case, fat wheels, in short all the 4wd rally gear.
And its a heap of fun!
The auto's almost intelligent, changes down by itself as you slow down. The 1600's engine braking downhill is superb, slip it down to 1st and it'll hang down a hillside something incredible. Going to be interesting when things get wet come winter, but I'd give it odds the big feet will hang in there.
The fuel tank fills with about 25 litres gas, and I dont see it any worse than the old under-powered Chinese ATV or the Eiger quad for fuel consumption.
The big ups is the capital cost of the thing, less than half a quad, and quarter of a sidebyside. There's a heap of parts available on TradeMe, and experienced mech's tell me they're a joy to work on.
The dogs have been a bit of a laugh working out how to mount up, in and out the windows, leaping on the bonnet, but they're getting the hang of it now.
Posted by john@waione No comments:

The highlight day of the year, for several of us Coopworth breeders, is the annual ram selection and AGM day. (NZOSR stands for NZ Ovine Sire Reference). Chairman Steve's report follows:


NZOSR 25th Annual Chairman’s Report
Welcome to what is NZOSR’s 25th AGM.
A significant milestone for any grouping be it marriage, club or sheep breeding group. That first meeting was held at Awahuri AB Centre out of Palmerston North on the 10th October 1984. Present were my father Timothy, John McDougall, Pat Dillon, Tom Martin, Graeme Mathieson, Jim Coombs, Don Ellett, Alistair Buchanan, a youthful John Wilkie and one apology from myself. Pat Dillon was elected first chairman and John has had an unbroken run as secretary and mostly treasurer.
Sadly 3 of these gentlemen have died, four have retired from farming but three continue as members. John was the leading instigator and put together a handbook and spent considerable time working out the nuances of those early years of sheep AI’ing. To the best of my knowledge, we were the first group breeding scheme to use sheep AI’ing as a tool. I remember John showing us a school compass set, a small flashlight and a piece of PVC tubing he had adapted to allow members to do their own AI’ing with fresh semen.
It was the new found ability to freeze ram semen that enabled a group of geographically spread sheep farmers to link their flocks through a common sire which we were identifying at our annual selection day. We continue that process here today but for a variety of reasons namely cost, better links from BLUP and other SIL tools, only two or three flocks are continuing with AI to remain closely linked and to access some of their new genetics.
Facial Eczema breeding for tolerance was the first item on the agenda at that first meeting and remains an important consideration for most members.
Several 1985 born sires were the first to be used, Ashgrove 135/87 was our first ‘star’ ram, and 48 rams from contributing studs carried the prefix of NZOSR until 1997 when we reverted to using the owners flock prefix.
Over the quarter of a century members and flocks have come and gone, hundreds of rams have been used through either AI, lend, lease, swap or sale, tens or probably hundreds of thousands of ewes and progeny have been benchmarked and ranked through our sire referencing programme.
Genetic trend lines show referenced flocks making significantly faster progress and a rough indication of this is that of the 35 rams on the first page of the Coopworth DPP ranking, 30 of them are from NZOSR flocks.
For many of us being part of a wider and cooperative sheep breeding group even though we are competitors in the marketplace is the best part of NZOSR and the meeting today to select the reference rams, exchange ideas and socialise is the highlight of the sheep breeding year.
We have been innovative, consistent and successful but we mustn’t rest on our laurels but be prepared to continue to adapt to new technology and ideas, refresh the membership and remain cohesive as we move into our next 25 years of NZOSR.
Steve Wyn-Harris
2/02/11
Our 20 odd member flocks are genetically linked through the use of common sires, in earlier times by artificial insemination, and more recently by ram share, swap, hire, or purchase, or a system of ram circling.
The resultant genetic linkage allows flocks to be benchmarked, and each year we assemble the top rams so identified at the AGM, where we have a group vote on which rams will be the link sires for the next round.

You can check all the across-flock performance lists on a further breed-wide basis at:
http://coopworth.org.nz/coopworth_home.htm
Posted by john@waione No comments: