Its now been 3 weeks since the flood, finally the silt has dried out enough to contemplate bringing some ewes in, bit of pressure involved, the Vet Club say they can fit in a half days scanning tomorrow.
I want to identify the empty ewe hgts, so they can go off the place as part of the de-stock program. The older 5 and 6 yr ewes came in with them, and the lower conditioned of that class can go as well.
We took a punt the mob wouldn't get bogged, particularly where Rob had bull-dozed the wet silt off the main track, into a windrow.
With all the gates opened for the mob to string its way in, they all very sensibly followed the well known path, we didn't push them and it couldn't have gone better. 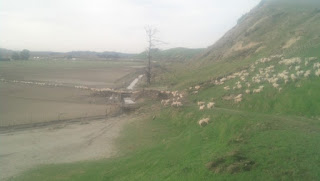 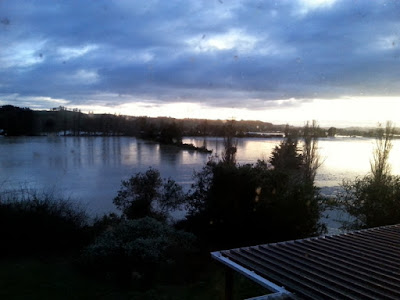 Here we go again......
This is the view at daybreak, Jun 21st, from the upstairs window.
The valley road follows the line of trees running left to right, and the river's supposed to be in the trees at the back.
This is 2-3' below flood peak we reckon, down in front of us the water's 6' deep, and over at the road, about a foot. It'll need to go down another couple feet before we can get out, that'll be in the 6 ton 4wd truck.
All the vehicles are up here, except for the tractor and bulldozer, which should be high enough not to get covered.
I left 4 horses in the paddock behind the poplars, left background, they would have spent the night up to their bellies. About mid-day I saw them paddling out, relieved to see they were still there. Plus my two herd bulls which must have swum in from two paddocks away.
Subsequent to this, we've confirmed the flood height's about a foot lower than 2004.
Every flood's different, this one roared all night. The whole district including the up-country hills had 150mm in 48 hours, on top of 150mm already recorded since the beginning of the month.
This is the 4th in 10 years, shifting stock and equipment followed the plan, we had a days warning from Horizons very good river level forecast system.
When the water recedes there's going to be another foot of wet silt over probably 3/4's of the flats, pretty disheartening after all the pasture restoration since the 2013 go.
My sister and her family's been chased out of their house again, they'll be up here with me a turn till their house dries out.
Several homes in the valley, same situation.
I guess if you live in a flood plain you have to expect some trauma, I know my father only had one like this around 1938, and its incredible I farmed 40 years flood free, to get to this.
Posted by john@waione No comments: