Well, some good soul did come and re-join the boundary fence where it was cut to allow up-valley traffic around a flood-blocked section of road, nice professional job too, so thanks whoever.
Now the water's gone, I see there's about 50 acres out of action, covered in muddy silt. I figure it'll take till end November to dry out, half of it will crack and let the grass through, and depending if it gets dry enough, will probably drill a summer brassica into whatever the grass dosent get its way through.
Once again, the village 2 km down the road suffered. Main part of the problem there is the on ramp to the new highway bridge across the river built in the 60's, now dams the free passage of water in a way it never did. That's engineers again for you, every time something substantial gets built, there's always a consequence down the line.
What the Whangaehu/SH3 intersection really needs is a 2 lane underpass under SH3, which will allow the water to keep going on its way.
Also, the intersection will be safer for cross and inter-valley traffic with appropriate on and off-ramps.
But what's the opinion of a humble resident farmer worth in the face of a qualified engineer?
In the words of our famous beer, Yeah right.......
Posted by john@waione No comments:

Here we go again......
I'd put this flood at about a 1 in 10 year level in terms of effect, and its timing in that frame is consistent.
Checking Horizon's river level forecasting yesterday, after only 22mm rain overnight, the gauge about 10-15km upriver from here was showing a peak of 11.5 metres to occur at 8pm last night.
The really devastating 2004 flood was 13 metres, and the 2006 one, 10 metres, but we were still a bit unsure how much we could tempt fate so far as leaving stock out.
Even though the local rainfall wasn't great, you cant tell what the effect of the huge catchment upstream from here will have, and I have to say, Horizons monitoring system, rainfall, soil saturation, expected run-off etc, works pretty good.
At 6 metres and rising at the upstream gauge, we know we have 6-7 hours before the river breaks banks down here.
The stud lambs are only a month old, but all the mobs got boxed and taken up onto the hill faces I spoke so glowingly of assisting the cow wintering.
The beef herd's right in the middle of calving, and one of those mobs we shifted, as it turned out, un-necessarily, and the dogs spent the night well above ground-level in the woolshed.
A visiting mare I was foaling for a friend, we arranged to go to Letham Stud up on the hill from here, and the yearling I was boxing turned out with a paddock mate.
After the 2004 flood, I dunno who it was, Min of Works I think, decided that there wasnt enough of a water-table along the road outside the farm, so they rebuilt the road 18" higher. I tried to talk them out of it, explaining if they they just cleaned up the road verge I'd be happy for the flood water to run free across the road into paddocks following its old natural course downstream.
But no...... it has to be one of the stupidest bits of engineering I've ever seen, the water stays dammed on the river side of the road, and runs through the family homestead that's been dry in every flood since it was built around 1920, and also through the horse stable.
The horses spent the night paddling ankle deep, but I'm confident they're safe around the stable paddocks, its just this infernal 4-6" that the road works is damming up that's really consigning the home I grew up in to be an elaborate hayshed.
Citizens of Wanganui ought to be careful about Horizons spending millions on city stop-bank works, in my opinion, engineers dont always get it right.
The best way to handle flood water is to watch what it wants to do, and let it do it un-impeded.
Keeping out of its way is the best strategy.
Now I wait for the flood water to recede so I can sort these mobs of sheep and cattle back out where they belong.
I'm grateful for the help of neighbours Malcolm and Cameron, shifting stock.
Not so for the young gawkers who farted up and down the road in their tractors this morning for no apparent reason other than the thrill of seeing if it could be done, and who helped themselves to a drive around my paddocks seeking an alternative to the impassible bits of valley road.
In the end I let them cut the boundary fence so they could get round, but I bet no bastard offers to rejoin the fence for me. 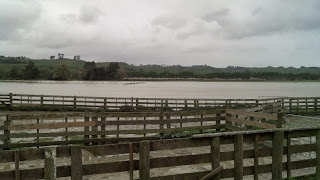 When in PN yesterday I bought a bike helmet on special from ANZA Motors Harley Demo Day, a  Scorpion EXO100.
Open face model which will earn me criticism from the full-face brigade. Such critics argue there's no protection if you fall face first, but ignore that lack of a visor riding into the sun is pretty imperilling with full-face, this one has a visor. Its also got a flip down sun lens, and have to comment its one of the best shaded lens I've looked through, excellent definition and very little dimming of the vision, and lovely range of sight through to the peripheral. Easily removable, and a clear one comes with it. The visor clips off too.

Riding home from PN, I didn't have a face scarf, but wind wasn't unpleasant. The wind noise is a bit distracting however.
At the sale price, $149 incl, it would make an excellent round-town lid, but I had farm use in mind if I wasn't bowled away with on-road suitability.
Bugger the full-face critics, most cops round the world wear this model, and as far as looks go, its a stunner. OSH have a real problem getting farm people to wear helmets on bikes and quads, and I think the main drawback is the models available are so, so, plain DAWKY.
A model like this, boys will be boys couldn't help wanting to put this one on!
Its really comfortable on, maybe a little on the heavy side.


Posted by john@waione No comments: