This year I've GGT bloodtested all 2th ewes coming into the recorded flock.
I used to do this on a regular basis 10 or so years ago as a better way of screening for FE resistance. I figured that proving a ram by dosing, then mating him to females of unknown resistance status didnt make as much sense as GGT screening both sexes, utilising the best and getting rid of the worst. 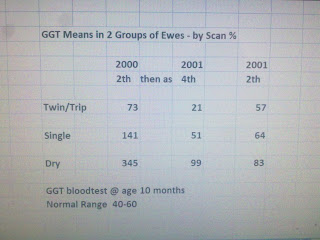 I ceased the practice when I started Ramguard testing stud sires. The cost of doing both was a bit of a burden, and there was always the thought that selection on conception rate/reproduction, part of the Coopworth Genetics breeding platform, was also selecting indirectly for resistance anyway, (see table left, ewes carrying higher sub-clinical FE have lower conception rates, data from the Waione flock), so I discontinued.
Its important to note that the GGT values shown in the table were obtained from no particular effort to induce or reflect a challenge. I'm often questioned on the validity of GGT screening like this, but believe me, variation is there, even if you dont see it visually, or register a challenge season. The response might vary from season to season, but the more important observation to my mind is that the "good" animals show no, or very little response by way of their GGT's elevating.
Recent and ongoing DNA research work by Phua and Dodds, AgResearch, Invermay, detailed in the 2011 AAABG Conference Proceedings, adds significantly to understanding the resistance problem, what to do about it in the breeding program, and is why I've resumed the GGT screening.
Sheep cope with sporidesmin in their system three ways:
1- non-absorption from the gut
2- de-toxification by the liver
3- or by the anti-oxidation process.
The researchers have so far found eight "chromosomalities" affecting these processes. They're gene groupings that dont overlap, and may be present, or not present, and in differing states of effectiveness, depending on mutation.
Which suggests the modes of resistance offered by respective flocks might differ.
There's also a suggestion some of them may be X-linked, ie. travel with the female X chromosome.
This latter point interested me, so I had a look at how SIL's FE index, DPX, related to ewe performance in the lambing paddock. In the Waione flock DPX is based not just on Ramguard dosing result, but moreso on the ongoing supply of annual GGT blood-test of all MA and incoming 2th sires, commercial included.

From just one season's data there appears to be a fair relationship between foetal/lamb survival and FE resistance as indicated by DPX. I hope the relationship will repeat this coming lambing.
I suspect the healthier ewes may better safeguard their on-board litter through the last few weeks of gestation.
Phua's research shows an ongoing ability for resistant genes to evolve from continued use of tested sires over ewes of even unknown status, over the last 27 or so years a steady heritability of .38 has shown no sign of abating.
By including incoming 2th ewes GGT I hope to make the flock DPX even more robust.
I'll be able to select the very best DPX sires to use in the breeding program, and drop off the worst females.
Its more than likely I'll discontinue Ramguard dosing, the rams I'm using are invariably passing .6 dosing anyway.

Email ThisBlogThis!Share to TwitterShare to FacebookShare to Pinterest
Labels: Sheep, Tools and Technology

Our industry workplace, the farm, is an environment where accidents, if they happen, can be severe.
Taking a basic first aid course is something I've always wanted to do, and I finally got to last weekend joining with one organised by my local branch of Ulysses Motorcycle Club in conjunction with St John's.
I thought we were in for a fair bit about doing stuff to wounds and bone breaks, but things have moved on over the years, and now its focussed more on securing the accidentee and immediate environment, and preparing for arrival and/or evacuation with the first aid response professionals.
St John have devised an acronym based response guide, DRS,ABC+D

We also covered dealing with choking, bleeding, and bone breaks in the immediate response context.

The St John website has a good summary of the above.
The St John course instructor was excellent, as was the St John training rooms, in fact, edifying to get to appreciate the whole local St John facility.

This week I've increased my regular donations to St John, and to the local Palmerston North Rescue Helicopter.
Compliments to Safety Officer Lance and Ulysses for taking this initiative, its comforting to know that on organised rides, most of the others will have a good idea what to do.
Might save a life.
Posted by john@waione No comments: