Zuk - back on track 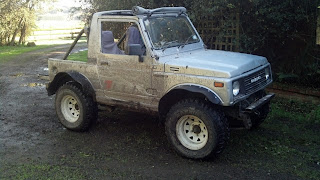 Nothing worse than a bit of machinery out of commission, its not so much the cost of repairs that's the bugbear, its the loss of use during the down-time.
For almost 12 months the Zuk has had a mystery miss in the engine. Some days it would run fine, others it would fart right down to a stall, most inconveniently under a bit of going up-hill effort.
I started by replacing the fuel filter, thinking that the intermittancy of the miss-fire suggested fuel blockage rather than electrics, but no go. Other experts, (always plenty of free advice available), suggested water in the fuel, and I thought, oh no, not that please, the tank is mounted behind a crash plate that would need half the rear frame removed to be got at.
My auto-electrician said a faulty coil can cause behaviour like that, so I put in a replacement igniter, still no solution, so while I was at it, I replaced the plugs, leads, and main lead. This created a real problem, one of the bakelite plug caps had stuck itself firmly on the plug, (they're quite long to get down through the overhead cam cover to the plug). I had to smash it to get it off, and mate Gareth tipped me to use the air compressor to blow the bits out before I attempted removing the plug. This was plug No2, and I went into a several month mental seizure before I got the gumption up to tackle the last two, which in Murphy Law tradition literally fell out, they were so easy.
But..... the miss was still there.
I'd checked the compressions while the plugs were out, and they were all OK, which sort of satisfied me that maybe the head gasket wasn't stuffed, but there was still an overheating problem underlying all this carry-on.
I consulted the chat sites, found a heap of threads voicing problems similar to mine. The most likely one was that there was a leak in the ignition advance vacuum line, check that, couldn't see any likely breach, but went over the whole air intake line and made joints as secure as possible.
Still no improvement.
Time to call in an expert, Dan Cowper, renowned off-road truck builder lives just over the hill from me. He jumps in, fats off up the road and back, and true to Murphy, Zuk behaves herself impeccably, and Dan dryly remarks, "No charge for the fix".
Jesus.... so off I go couple days later out the back of the farm, and Zuk does a complete stall on me. So I'm sitting in the sun cooling my heels, and my temper, doing the odd lap round the Zuk, searching the sky for inspiration, etc.
Gazing round under the bonnet. The distributor cap's bolted on rather than clipped as more usual with distributors, and a glance round the bottom side reveals the bottom fixing bolt's missing. I hadn't bothered to look under the cap before, thinking bolted on, cant be a problem there.
Well, bugger me, when I took the cap off, there's so much rust flake fluffing round inside like you wouldn't believe, the contacts are green with corrosion, and the carbon high tension button is missing completely. Gave it a scratch-up all round with the pocket knife, and scraped as much of the rust out as I could, and voila! Zuk roars into life.
So, back home, good blow out with the compressed air, new cap and rotor, and the engines running like I cant remember.
But, the troubles don't end there!
A clack, clack, clack, starts up somewhere under the front end. Oh no..., CV joint?, universal?, gearbox?, transfer case?...
I check the wheel nuts driver side, they're OK, don't bother about off-side.
Call Dan in again, he walks round the off-side, all the front wheel nuts are loose. "No charge for the fix", says Dan again. Strangely, the steering isn't wandering all over the place now either!
Anyway, happy ending, and to cement that in have tek-screwed on some mudguard flare extensions, so I can drive round with my elbow on the window sill, and not get mud up the side of my face as well.
At the Mystery Creek Field-days noticed at the Suzuki Stand, soft tops on the farm Jimneys, on enquiry have been able to get one from the Wanganui assembly plant. Built for the longer Jimney deck I've had to cut the back end off, but I've got it rolled and bungeyed to the windscreen front edge, for unfurling in the inclement weather.
Tek-screwed a rubber mat to the inside of the tailgate to complete the touch-ups.
And with the engine running as it should, miss-free, the over-heating problem has abated.
Can't help recalling the old rule, if an engine's not running right it'll be 90% ignition the problem.
Anyway. Joy........
Posted by john@waione No comments: