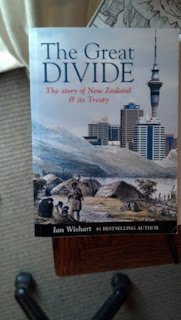 I've put this slant on the Treaty of Waitangi in the farm blog under 5th Dimension stuff, rather than where I normally do book reviews on my jreb blog, given that security of tenure, the foundation of our Kiwi brand of capitalism, has an elephant in its room in the form of indigenous peoples (aka Maori) aspiration, originally over land issues, but now bounding over coastline, water, and air.
Us farmers with our land-holdings and proximity to the latter two, can be forgiven for taking the occasional glance over our shoulders.
You have to hand it to Ian Wishart as being one of the most prodigious researchers in the country, even if he's regarded as too much of a conspiracist in some quarters. His work on climate issues in "Air Con" is monumental, and he's sure made a good dig into the archives with this book.
One of the misfortunes of history is its propensity to be re-invented depending on the world-view of its interpreters, and I think a lot of that goes on with the Waitangi Tribunal. "The Great Divide" wont make any in-roads on that score, rather its benefit is as a good back-grounder for those watchful of us having to make a living under the elephant.
As a whakapapa'd (identifiably lineaged) blended Kiwi myself, (can get to Hawaiki, the original homeland of Maori, in 21 generations), I agree with Wishart's conclusion that the Treaty was embraced at the time, 1840, as the best opportunity for security of tenure for the locals in what was an increasingly "wild west" scenario, with the gun trade taking tribal conflict to an horrific level, and the French and Americans sitting in line for de facto authority, bleak alternatives if ever, particularly when you look at their respective poor record of colonisation and dealing with indigenous peoples.
Indeed you have to ask what Maori left Hawaiki for in the first place. Go to any established Pacific society and you'll find our rangatira level were subordinate to at least two higher levels of society, and often a royal family. Maybe it was they left because more than the heat of the tropics got too great, and not just sailing off for the sake of adventure, but actually to secure turangawaewae, "a place for their feet", somewhere else.
While a number of chiefs and tribes maintained a never say die 'its all ours, bugger off whites' stance over what they considered constituted Aotearoa, and the call still taken up today, Wishart points out the little credited and remembered hui at Kohimarama where the majority of chiefs ratified their defence of the 1840 Treaty and allegiance to the concept of Crown, 20 years later. He argues this as evidence of a desire by the chiefs to advance individual land title, and once enshrined, to enable whatever disposition desired, including sale.
Dunno.... the plot around land sale by chiefs gets pretty thick outside of this investigation.
You can argue back and forth on the legitimacy or otherwise of both sides of the from then till now issue ad infinitum. What I think it comes down to is where NZ society wants to take it to today.
Simply, put it to the vote.
Wishart's concluding plank has much merit too. Do we want a written constitution holding Maori aspiration and the Crown, as jointly superior to the wishes of the people?
That's no constitution at all. If it was to be one, the people would be at the top.
Otherwise, why bother with a Parliament.
Posted by john@waione No comments:

Finally got a still morning, and AeroWork's Dean Lithgow was on the ball, turning up to do the annual gorse run in the Squirrel, a nice smooth machine.
Its a long shot from early days of Alexander Helicopter's Bell, (aka the ones you see in Mash *** re-runs), piloted by Rex Sherlock. It was quite a novelty in those days, I got the show-around-the-place rides as a school kid, one time hooking the skid under a cast ewe to flip her on her feet, and another being heroically delivered to school.
The old man used to do it but he got put off the time they were puttering up a gully when the power board high tension lines suddenly appeared in front of the perspex bubble, this was in the days when the industry didnt think about those things. Rex dropped the chopper 12' in a fraction of a second, and went through underneath, but the impression was significant enough, the old man delegated me to do the spotting from then on.
Rex further expounded about the time he was doing a job in a remote part of the Waitotara Valley, when he got a skid entangled in the telephone wires beside the road, and try as he might backing up and dropping and lifting, the wires wouldnt let go of him.
As extreme good fortune had it, the P&T, on a rare occasion, happened to be doing line maintenance less than a mile away, and on hearing the chopper working so close the men decided to go and spectate. Lucky they still had their ladders on the truck.
Back to the gorse, last years spray-up was done in Jan, a bit late in my book to catch the best of the growing fronds, at 7 litres Eliminate (Ravensdown's Grazon equivalent) per ha. While the kill wasnt 100% I was happy enough with the foot or so knock-back in bush height. I was also amenable to Dean's suggestion to do 8 litres on some of the heaviest this time, but I think being on the button with the November timing will see it brown off pretty good.
Posted by john@waione No comments:

Steve came in recently to do the annual eye-muscle scan on the ram hoggets, which I start into selling to the commercial flock market late Jan/Feb 2013. Measuring muscularity is an indicator of meat yield and heritability of the trait is quite high.
I use Ian Walsh's Falkirk scanning and indexing system, Steve, his local area agent, comes over from Taranaki to do mine.
The results are always something you look forward to, but this year marks the first progeny crop of a sire ram I like a lot, (we breeders all have our from-time-to-time favourites). This year its Waione 75/08, a bigger type of sheep with a good thick carcase. He and his twin brother have dominated DPG growth index from their hgt days.
Falkirk put out an index summary based on the usual combination of live-weight, eye muscle width and depth, and rib fat depth. It dosent have the sophistication of heritability included as do SIL index values, but at least you know the h2 of around .30 applies equally to all the hgts.
They also do a sire summary, assessing % of progeny falling into 5 progressive grades of excellence.
75/08 heads the bunch with nearly 68% of his progeny falling in the top 2 grades. 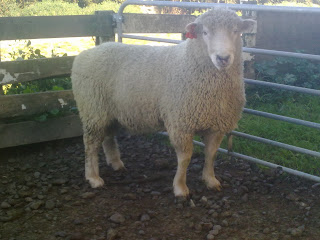 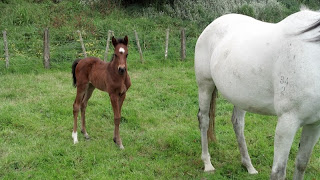 Just one foal this season, born 11th Oct, by Helmsman, from Danske mare, Local Knowledge.
Back in the 2011 breeding season I'd invited Peter Hall to come along to Dalacine Farm taking a look at Indy King, who I was considering putting my own mare to.
I was taken with Helmsman's disposition as we passed his paddock, and with his conformation cover off, and then with his resemblance to Buckpasser, his paternal grandam's sire.
He was a fair performed Group winning horse himself too, over a million in stakes from 6f to a mile and a quarter, started his stud career in USA in 1998, and his US progeny have won over $18m.
Seriously, thats a lot better credential than many of the high priced stallions standing round the country these days. Its a rich pedigree to boot, not a bum line in the 5th remove, Northern Dancer on the top-line, with a 5x5 of War Admiral, and a 4x5 of Princequillo, giving Round Table in the dam's sire-line.
The dam had 9 foals to race for 8 winners, one other group winner beside Helmsman.
Knowing Peter and partners were in a hiatus with Local Knowledge I made an offer on the spot to go 50/50.
So, all year I've nursed this expectation of a mahogany bay Buckpasser look-alike, and was a bit dumbfounded when a little bay filly popped out instead, star, white hind fetlock, which set a memory bank scan in motion....... Danedream....
Back inside after the foal had got its first drink, she did that in short order too, I did a Google on last year's Prix de L'Arc de Triomphe, and bingo, little bay filly, star, white hind fetlock, only we got ours on the side opposite to Danedream's.
Main similarity is the Northern Dancer on top and bottom line, Danedream gets hers by Nijinsky over Danehill mare, our foal gets hers by El Gran Senor over Danehill mare, quite close on the Northern Dancer double.
Frankly, I think ours is a better pedigree with Sound Reason and Sir Tristram chucked in, yielding a double of Round Table 5x7, plus a 4x6 of Buckpasser, and the Northern Dancer 3x5x6.
Here we go...... dream number... whatever, lol