The last 9 days of 140mm rain has saved our bacon, and the Feilding store stock prices are on the move back up.
With only 22mm in Nov, flanked by 70mm odd the months either side, things were starting to look pretty grim. The hills had burnt right off with the wind, (still at it too), although the river flats were still pushing a bit of grass up. 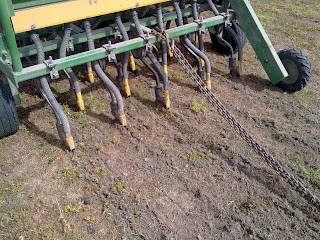 The pasja summer feed crops, direct-drilled early Dec, germinated very patchy. What was obvious, was germination was better in the heavier soil areas, or where I'd inadvertently had the drill coulters digging deeper, eg on turns or headlands.
The T-shoes are mounted on spring tines, so sharp turns are out of the question, all sorts of funny cultivation happens if you do.
I therefore use electric fence pegs to mark straight travel lands to drill to, and I did notice they were hard to force into the ground the first 1-2", then went easily, damper soil deeper down.
I've only had the drill about 8 or so years, and this is the first dry spring sow I've had to contend with, so the lesson I've learnt to try next dry one, is to sow deeper to get the boot under the dry surface, and maybe not use the covering harrow to avoid getting the seed buried too deep. 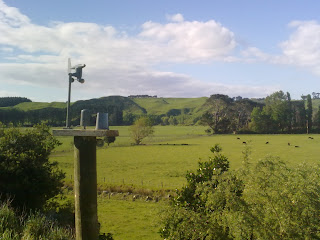 Speaking of rain and weather, I recently installed one of those remote weather stations that transmit all the data to the console inside the house, range up to 100m, Thermor brand, made in China, got it from Farmlands. Saves getting your feet wet. Apart from rain, it does humidity, temp indoor and out, wind speed and direction, and a 24hr barometric trend graph. The old conventional rain gauge is nearer ground level about 20m away, and I've found the fancy one measures up to 1-2mm less each rain episode. Not really sure why this happens, possibly there is a site variation maybe due to proximity to ground level, or as someone commented, there may be more spiders in the bottom of the old gauge. Also had a problem when the electronics failed and a couple days drizzle never showed on the console, which necessitated a reboot.
Like all things electronic, you need an operator sixth sense.
One thing it does the conventional isnt very good at, is record heavy dew-fall
Posted by john@waione No comments:

"The rise to power of two racing dynasties."
Took a while to read, not exactly gripping, but a lot of interesting stuff about the Sydney bookmakers and the Smith training empire, moreso when you know of the characters involved.
There's little doubt these families are part of the aristocracy of racing, the book gives you some appreciation of how they got there, not without a lot of hard work, blood, sweat and tears. As you see time and again in business, if family combinations work, stay, and play together, establishment, success, and growth can be phenomenal, if not steady.
From first mention of the Waterhouse name with the arrival of the First Fleet in Sydney Cove, (officer class, not cattle), through the Fine Cotton affair, to Tommy Smith's humble rural origins and Gai's eventual rise to Tulloch Lodge first lady, a fine sweep of aussie history.
Of particular interest to me, Midshipman Henry Waterhouse on first fleet ship Sirius took up taxidermy while in Sydney Cove, his growing collection being lost when the Sirius went down at Norfolk Island, another early penal establishment. Henry made rank of captain and in this capacity introduced a broodmare and some merino sheep sourced from Capetown. Grazier John Macarthur bought some of the sheep, to found a notable segment of the Australian wool industry, while Samuel Marsden bought some of the others, presumably they might have found their way to NZ.
My Old Man sent his good stayer Ruato over to Tommy Smith, where the horse got 2nd in the Queen Elizabeth Plate and a placing in the Tancred prior to running 7th in the Sydney Cup, but was sent home shortly after, ailing, it was subsequently diagnosed, from rickets. The horse had gone from having the daily run of a Wanganui grass yard to a 24/7 Sydney stable, the only green feed available was lucerne hay, and the ONE thing he wouldnt eat was....... lucerne hay.
Not all lost though, in those days you needed overseas funds to buy a new car, and the Old Man lent me enough to acquire my first car!
And the mighty horse, Kingston Town, who I saw win both the Derby and the Sydney Cup as a 3yo at the Easter meeting.
Final comment, one on Gai's pathway to assuming the Smith training crown. Well versed in the horse business of her father as a youngster, trackwork riding etc, she made the break to London to pursue an acting career, had parts in Dr Who, various plays, and on returning to Australia, Young Doctors, then her own show Track Time on Channel 7, the personal skills so acquired and honed standing her in good stead for her subsequent role at Tulloch Lodge.
Always good for dynastical aspirants to learn an outside trade, new skills introduced can take the family business places its never been.
Good read, 3 out of 5.
Posted by john@waione No comments:

The wowsers are at it again.
In today's Dominion a Wellington Coroner blasts authorities for a lack of action mandating helmets, lap belts, and roll bars on all quad bikes.
The article then goes on to say the latest fatality of the 122 over the last 10 years, had never ridden a quad bike before.....,
So help me...
Some time ago I saw a statistic that went something like 46% of all such fatalities were attributable to inexperience, as in, mostly townies either visiting their country cousins, or sampling the work-style for the first time.
Such is the bain of my life, all these young smart-arses who think working on a farm comprises 100% blatting around at speed, eager to unleash their prowess on the machine, getting to and between jobs quick az, more important than actually knuckling down and doing something.
Furthermore, a bloke needs the BNZ behind him to keep the machinery up to it.

I agree with Benny Bennetts, and Bill Grice, CEO SuzukiNZ, correspondents in the latest Farmer Weekly, who say all that suggested extra gear won't make quads safer.
Where on earth that next letter comment came from about the father and son coming off their Suzuki quad within the same week, I dunno. Seems more like a congenital mental deficiency to me, wasn't there a lesson could've been learnt from the first accident?
I've had Suzuki quads for over 10 years, my current Eiger, (one of the initial run), has done nearly 30k of sterling and reliable work, in all conditions, on all surfaces and slopes and angles, no problem.

If this stuff ever gets enacted, any visiting OSH inspector will need to be sure of catching me on a good hair day.
And if they do make an example of me over it, I might just go back to a horse.
Try putting a lap-belt and roll-bar on that.
Or maybe for a change of vocation I might try being a Coroner.
Over in America, coroners are the subject of local elections, like the sherriff. Over there you can ride a motorcycle on the open road, in a T-shirt, without a helmet, just like we've done for years on farms here.
Just one important qualification to add.....
I rarely exceed 20kph on my quad, around the pace of a trotting dog.

ps. an interesting observation...
The maori part-timers I employ, to a man, (and woman), aren't smitten with the same machinery/boss abuse syndrome their pakeha counterparts display when given a quad to manage.
Its like they're chuffed at being given the responsibility, plus some intrigue at what the machine can do.
Or maybe they're just copying the Boss.
Posted by john@waione No comments:

I paid up the first WPI share call, rather unhappily, as like most sheep-farmers, my operation's not flush with fiscal wriggle room at the moment. (I did so mostly because the local co-op woolstore was one of the first to sell out to WPI).
I don't particularly believe in the concept either. Even if we owned the whole national supply chain, we'd still only be a supplier, and up for the screwing that business model gurus as long past as Michael Porter said is the first port of call (the supplier) for belt tightening processors and further along the line consumers.
I'll come back to this later.
Further, why are we having to buy the assets of Wools of NZ?
I thought that got established with our money in the first place, and OK, if it is part of the deal, who's going to get the proceeds......, us?
Or is it going to stay with WPI/WNZ to fund further market development?
Or, just where is it going?

Also, we have to accept, the exporters have got their act together better with promotion.
More particularly, the Elders/Primary Wool combine have made a magnificent effort with Just Shorn since dis-establishment of the Wool Board, and WSI have worked hard to establish Purelana as well.

But back to business models.....
I thought the most significant comments of recent weeks have come from Robert Pratt, former MD of ElcoWool, and a director of Cavalier Corp. His vision of vertical integration, all strong wool going into the production of Cavalier carpets, was the right idea, we make the stuff here, export it round the world.
Unfortunately he says, Cavalier weren't up for/to it.
More profound than this, was a concept promoted over 40 years ago by Jim Rowe, then Director of the NZ Institute of Economics, who said we should buy Courtaulds, the largest European synthetic manufacturer/wholesaler/retailer, lock stock and barrel 60 million pounds, (at the time the NZ Wool Board was holding over 90 million pounds in the grower reserve account ex the WWII payout). Courtaulds annual fibre output was greater than the total NZ wool clip which at that time came off 70 odd million sheep.
Think about what we could have done with that.....

Anyway, back to Pratt......
Like WSI do, he claims suppliers were very happy with the prices they were getting, but I dunno....
I tried dealing with both ElcoDirect and WSI, but there was a constant pussy foot around paying me just below current auction value, so I think there are a lot of those suppliers deluding themselves about the values they achieve. The logistics of getting my wool to either of these outfits was the final straw, and I went back to the local co-op.

Seriously, the move by farmers to private buyer, away from the auction system, simply undermined the main determinant of value. You can blame exporters for shooting the market in the foot if you like, but I think farmers did it all themselves by deserting the auction and giving them that power.

Joke of the summer I'll award to John Thorley, Chairman of the Campaign for Wool who promises that ".....once within the fold, there will be fair and equal opportunities for all members to operate and use campaign resources."
WPI have copped some stick for not being on board, but didn't I read somewhere that WoolsNZ were, so indirectly we were.
If WPI dosent fly, it'll be the business as usual we've become accustomed to.

I think I'm coming round to being a more aggressive WPI supporter.
Its them or us.
Posted by john@waione No comments: