This farm runs the Coopworth breed, a dual-purpose interbred based on the Border Leicester-Romney cross, popular in the 1960's for its ability to outperform both parents for lambing by some 20-30%, as well as maintain and improve on wool production and general mobility.
The breed society was established formally in 1970, pioneering the implementation of regulations forcing the selection of only the best performers as stud sires and recorded ewe flock replacements, and a set of performance based rules determining which individuals could remain in the flock.
The breed's philosophical home is Lincoln University, where renowned animal researchers Prof IE Coop and VR Clark, assisted by local Canterbury foundation breeder, Sir William Dunlop, promoted a performance based Flock Book, the first in NZ. http://coopworth.org.nz/
Progressive review and raising of performance qualifications by the Society has ensured the initial objective of  capturing the hybrid vigour capabilities inherent in the cross, has not only been attained, but systematically and significantly improved on, in what is now a breed well in its own right several times removed in filial generation.

The Waione flock has been interbred since the mid 1960's, when ewes screened for twinning and wool mated to Lincoln (Fl.1) and Hinenui (Fl.5) sires, formed the basis of the ram-breeding nucleus registered in 1970.

A foundation participant in NZOSR sire reference, genetics introduced since 1985 have been reference proven, with flock selection philosphy focussed on the SIL dual purpose goal traits of reproduction + survival, growth, meat, wool, and facial eczema, plus commercial suitability assisted by muscle scanning and wool sample testing.
The recorded flock has been extensively screened for FE tolerance by GGT blood test, and within flock bred sires are tested at Ramguard .60.

The flock produces about 50 2th rams of both SE and commercial standard for sale each year.
For further details on these rams got to the "Ram Buyer FAQ" (frequently asked questions) section, indexed on the right side of the blog page. 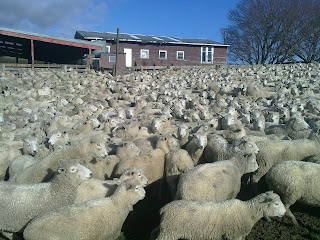 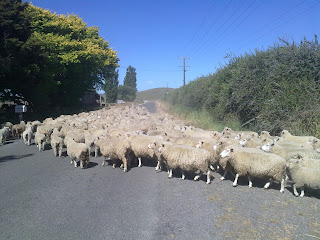