"I stood upon the hills" 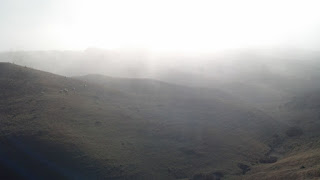 Tennyson said that.
"I stood upon the hills as heaven's wide arch, was glorious with the sun's returning march."
I always get a buzz out of early morning muster, sheep snort somewhere in the mist and slope off around their hill trails as the dogs do their ancient caper, sending their booming bark and howl down the gulleys.
The NZ huntaway was bred from crossing labradors with hunting hounds, hence the howly bit, and the penchant to run down their next feed, if you dont keep an eye on their training.
Posted by john@waione No comments:

One of the best times of the year in the stud flock, selecting the 2th keeper rams.﻿﻿﻿﻿﻿
Selection was initially done using SIL eBV's, but the candidate group were also DNA sampled for the Ovita 5K Beta test, and gBV's for that have since been returned.
gBV's are the result of blending the estimated and the molecular BV's.
The mBV merely confirms or endorses the eBV already known for physical traits of high heritability, eg. live wts and fleece wts, but its real value is making selection more robust in traits like NLB or SUR with low heritability that only come to full measure over some years:
Or feasible, in the case of traits where no observation is done at all in this flock, eg. carcase yield measurements for shoulder, loin, and rump; internal parasite resistence; and dag score.
﻿﻿
﻿﻿


﻿﻿
﻿ The dark stain in the fleece on the side of some sheep is from the parafin used during ultra-sound muscle scanning, nothing permanent.
Posted by john@waione No comments: