The Price of Milk

Controversy over the price of milk continues to simmer.
True to form, the socialists in our nation continue their pretention to privilege, in this instance that because we're an agricultural nation, milk should be delivered to society at below market price, sweeping under the carpet of debate, the fact other more delectable food groups and consumer products have risen over time to a much greater extent, eg. bread, fuel, booze, smokes, and pretty much anything else.
Yesterday it was announced, as a result of the public enquiry into milk pricing, that the dairy farmers co-op, Fonterra, have made public their pricing mechanism, simply that its based on what could have been made if all the milk had been sold as milk powder on the international market.
Its supposed to be internet etiquette not to slag people and stick to the debate, so I'll refrain from saying what total dicks I think Green politician Sue Kedgely and that union bloke Ritchie are for stirring this scrum along and for still being on Russia's side.
From one side of their mouth they'll argue what really amounts to not being able to stand farmers co-op'ing themselves into a position where they can set prices, when in actual fact dairy producers, like all farmers, are still price takers not setters, of the international value of their produce, while expecting to be able to organise themselves to both screw the price of consumer products down, and still somewhere along the line, crank the cost of their own wages up.
Tom Scott joined the fray yesterday with a cartoon inferring Saudi commonfolk would be up in arms if they had to pay international price for fuel, and that the Saudi princes should find out how Fonterra do it to NZ with milk products.
But he's way off beam too, they probably are paying the international price, its just that governments round the world inflate the fuel price with add-on taxes so that Proles like him and Kedgeley get their grievances soothed, just like booze and ciggies are tax-added to death.
They need to go overseas a bit and see what the rest of the world's like, then come back, stay inside the Kiwi tent, and appreciate that the current NZ co-op generated dairy farmer good fortune cant eventually get anywhere else other than into the NZ economy where we all get to share in it.
Another irony is, those of Green ilk would slag dairy products as being bad for one's health, but now complain when the rise in cost of it might suppress consumption.
They also assume an entitlement in an industry they never had a hand in shaping, or were paid for if they did, and which the environmental lobby continues to condemn.

Time for a Tui ad...
Yeah right.
Posted by john@waione No comments:

One of the things you look forward to starting out shepherding is building a team of dogs, little knowing the life cycle of a dog is no more than the family cat.
The time from when a dog "arrives" at a place he's working well, does everything you want, and knows it, is then something very precious, the appreciation is mutual and the relationship gets special.
The day they're no longer with you always arrives with a bit of sadness.
I got Khan as a fully broken 4yo from Duncan up the river a bit, and well trained he was too, never more than a cigarette paper from your heels, but always busting to get out and run.
His forte however, was backing..., through a gate, in the crush, up the woolshed ramp, and well into the shed.
He earned his place of rest in the lawn, the "Arlington" in view of the kitchen window, with his own rock headstone beside the other all-time bests, Blak, Judge, and Booze.
I'm reminded of an earlier passing, Joe, my first heading dog, had gotten so non-compus at 15 he had to be put down. I turned up at the house for morning smoko I suppose looking for some comfort, and my now ex missus asked what I was blubbing for, after all he was only a dog.
All I could respond was every morning for the last 15 years he was excited to see me, and that's more than I can say for the 5 you've been here.
Bit like that joke about who's man's best friend, your missus or your dog.
Shut them in the boot of the car for an hour, then see who's most pleased to see you.
Anyway Khan, farewell from all of us, and I hope there's a good spring, plenty of sheep to dream about chasing, cool vehicles to ride in, and a boss like me for you..., wherever dogs go. 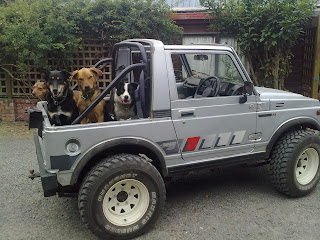