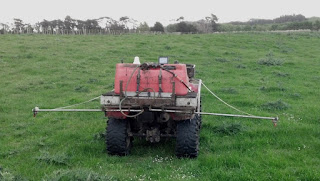 Fitting out a 4 metre 4-wheeler mounted pasture spraying rig with a $4000 GPS guidance might seem like an over-luxury.
And hoo boy, yep, it is.
Previously I've used a foam-marker for those circumstances where poor light or insufficient grass length have made row-tracking difficult or impossible, but not without some angst, namely the foam would most times run out before the tank load did, and worse, the foam track would all have dissipated before you got back to the paddock with the next load.
Add to that, the inconvenience of trying to refill the foam tank with its residue froth trying to climb out while you're trying to add the next charge of foam concentrate, plus the time for loading the extra 20 litres of water... a couple of seasons riding with Sandford's fert-spreader trucks and watching their GPS guidance system operating had me day-dreaming big-time. 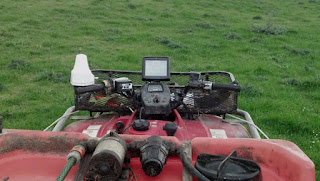 So it all came to pass when I stumped up for a Raven Cruizer II unit from Croplands stand at this year's National Field-days.
The white thing on the left is the Helix antenna, accurate to 23cm, its got a strongly magnetised base, plonks stable anywhere metal.
I decided the console should centre mount, reasonably high, fixed out front rather than on the handle-bars, so you can keep a better bead on direction of travel. A lot of tractors have the GPS consoles mounted well off to one side in the cab, which I think would take your eyes off where you're going, unless of course you're doubling the cost of installation opting for auto-steering control as well, but hey, this is a 4-wheeler I'm using here.
The console gets its power from the cigarette-lighter style plug most 4-wheelers have, a simple plug-in.
The unit took ages to establish satellite link, so long I thought something was wrong, went inside to have a sob and a cuppa, and a think about phoning the agents, wandered back out and voila, it was all go!
On initialisation, which was well programmed to be intuitive and I completed with minimal referral to the manual, which itself is appropriately minimal, you set up the swath width and fore and aft and sideways distance from the boom centre, then you're good to go. 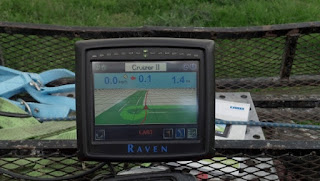 You get 4 tracking options, following where you went last time, (which is what I use for round and round), straight lines as in "lands", bent lines, and circles.
There are 3 indicators telling you whether you're on the right track, a line of LED's across the top, green when you're on track, red to the side if you stray; directional arrows in the blue horizontal band showing where you should steer; and the one I settled on for preference, when you line up to your previous track a red path-line appears, and you keep the point of the arrow on the line, a lot more intuitive than the other 2 systems.
Of course, you cant beat visual on your last row, but then you dont always see it, and that's the purpose of this exercise.
The stats in the blue band are pretty good, ground speed in particular for spraying, but the ha meter includes all your turn-outs.
You'll see from the pic I'm leaving a few ta ta's, but that dosen't worry me much, there's enough drift at the boom's extremes to cover it I think, and also given the 23cm accuracy give or take.
By and large, my eye's a lot faster than the GPS, but I might try setting the fore/aft initialise at zero to see what happens.
Very convenient too, when the current load runs out, the system tells you where to resume when you've refilled. Re-booting also happens quickly when you switch on after the refill.
I'll be using the system on the tractor in a month or so's time too, mine's an old one, sans cab, when I do my summer crop direct drilling which I have to do in lands because the drill cant do turns. It'll save me having to get on and off to step out and peg the strike-outs, then pick up the pegs after.
The mounting systems supplied in the box make transfer between vehicles very practicable.
Very happy with this purchase.
Posted by john@waione No comments: