Have quite often looked up various ATV comparisons and reviews, mostly YouTube posts, and have been highly entertained by the comment, mostly American in origin and some pretty vehement, about performance and reliability of the different makes. Manufacturers, amusingly, aren't past slagging each others product either.
The old Taska Colt here has put in a creditable trouble-free year, but I have to admit, we could do with a better representative in the particular work-slot it occupies on the farm. Main problem, its an NZ put-together of Chinese manufacture origin, and although I thought any reliability problems could be negated by cheaper cost of replacement parts, this theory got blown out of the water when the parts supply dried up.
For a while, local 4WD supremo's Cowper Trucks matched parts, or made them up from scratch, but theyve run out of enthusiasm, understandably because of the dead time involved.
So, I resolved to return to the name manufacturers where servicing and repairs would be assured, and ironically, driving past the local Yamaha dealer's yard, I'd often spotted a Big Red Honda on the used lot.
On going in for a more detailed look I got presented with the new Viking with its attractive finance no deposit/2 yrs to pay package, and a weeks trial offer, one I couldn't refuse.
Well, the Viking was great, a real man's machine, looked good, felt good...
But I didnt buy it.........
Thought I might as well try the Honda, and finished up deciding to take it instead for the following reasons...
So that's about the extent of the issues that concern me on both vehicles. Nothing much between them 700cc engine wise.
If I had 1000 acres or more and wanted something capable of getting to all corners of the estancia including the least accessible, and back, with grunt and power, then its the Viking, specially if other personnel to be carried.
The Big Red suits my more laid back requirements.
You might ask why I didnt try the new Honda Pioneer, well I did.
Didnt get off square one..., its designed by someone with a 34" waistline, I just didnt fit behind the wheel!

Email ThisBlogThis!Share to TwitterShare to FacebookShare to Pinterest
Labels: Machinery

Its not just us humans that get to have big adventures, these two guys (Waione Coopworth ram lambs) are off to Nepal, but unlike us, they've no idea whats next in store. 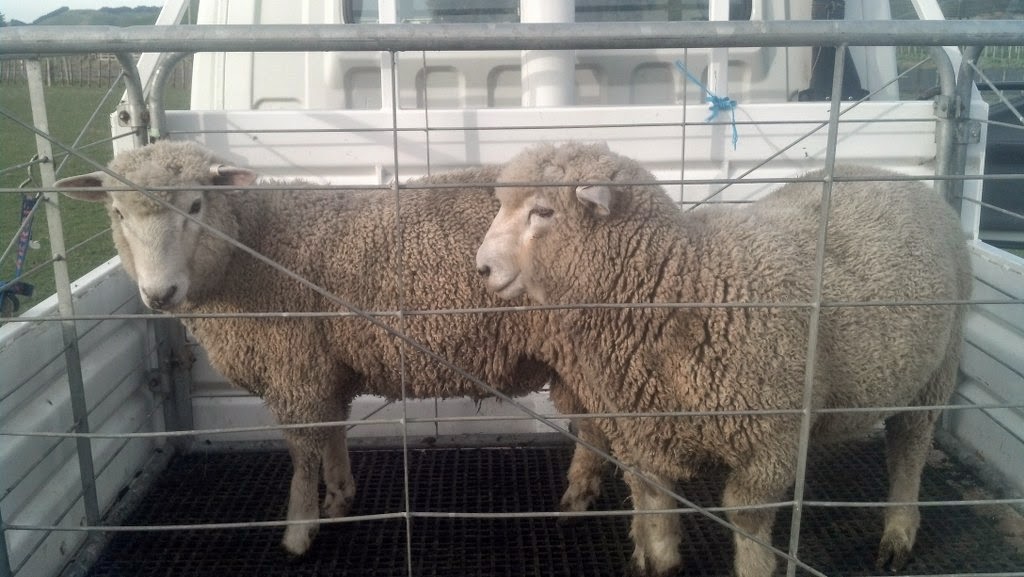 They're going to an international aid project there. At first you'd think, too high, too cold, but have been informed Nepal has substantial tracts of flat land, and summers can be pretty warm.
In addition, the project facility housing they're destined for would be the envy of many Nepalese so I'm told.

One of the ram lambs was from a small AI get of Lincoln 201/10, who was the top meat quality index sire of our NZOSR sire reference 2012, so apart from my concern for their future, I'm also conscious of losing some good genetic material. But the supply specs stipulated no duplications in a 5 generation pedigree, and only a handful of my sheep fitted spec.

The purchasers obviously want as diverse a gene spread as possible, given that the females in the shipment mostly came from one single source.

I felt for them as I dropped them off at the Feilding transit yard on a chilly grey winter evening for the first leg of their journey. If you've worked animals long enough you'll appreciate what company of mates means to them.

Travel well little friends. I hope you're well cared for in your new home, and you get to do us proud.
Posted by john@waione No comments: