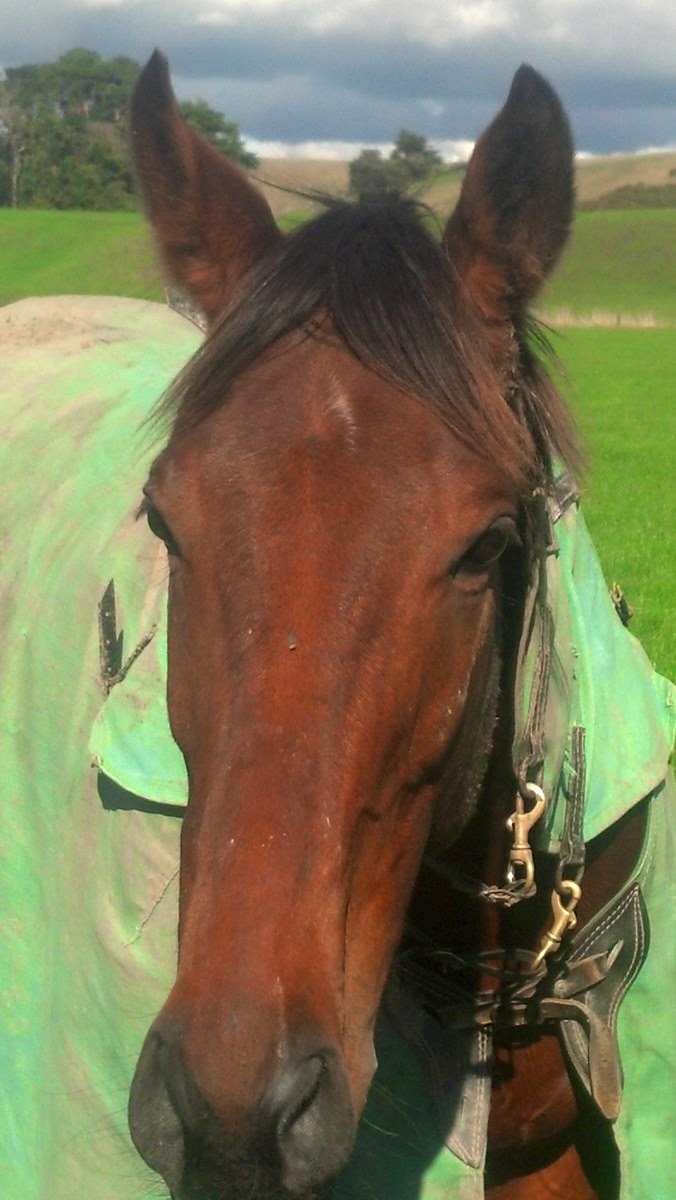 ﻿Looking over the boundary fence at the moment is O'Leary brother's Who Shot theBarman, with all the bearing and circumspection of a character who's been somewhere/done something, coming up to the fence to check out having his photo taken.
All with some justification, as he's recently returned and spelling, after a trip to Randwick chasing the Sydney Cup. Not to be this trip, but his dozen or so lifetime starts to date having yielded the G1 Avondale and Auckland Cups. Plenty of time for more, he's only four.
Along with my father's Ruato win in the Auckland Cup in 1961, some mileage has been got out of a second one coming to this little part of the Whangaehu valley, but in fact there's a third slightly tenuous connection in the winning of that race by Neil Connor's Bodie in 2003, ridden by ace Noel Harris.
Neil moved from the valley some years ago, but the Connors family name is synonomous with racing in these parts, as our generation stem from a quadratic of racing fathers, Stan and Bill Connors, Humphrey O'Leary, and my father Don.
There's a bit of a mention in Noel Harris' book, "Harry, The Ride of My Life", which I've just finished.
For anyone involved in racing over a number of years, its a sometimes hilarious walk down memory lane, racing folk being the comedians they are.
But there's also a good examination of the life of dedicated racing people, and in Noel's case the demands on a jockey to keep peace with family, trainer, and owner connections, not to mention making correct weight and all the other self-management that comes with the game.
He laments the loss from the scene of the farmer/owner with 2 or 3 horses in work, loyal supporters of their chosen trainer and jockey.
Me too......
For some reason the economics of sheep and beef farming have switched over the years to being a benefit for the rest of NZ rather than one for us owners of farms, and small communities and their trainers have suffered decline as a result, as Noel refers, Woodville, Marton, Waverley, Feilding, Levin, Otaki.
Sigh...., those were the days!
Dad and I mostly had 2-3 in work at one time with Don Grubb at Feilding, Malcolm Smith also trained there.
The track's gone now, and I can hardly afford one in work.
Posted by john@waione No comments:

The general election's only a few months away, last week the Opposition Labour Party announced some of its plans for control of the economy (inflation, house prices, etc), main part of policy being, universal compulsory superannuation, with a sliding % contribution determined according to inflationary pressure.
Up till now that's been handled by the Reserve Bank adjusting from time to time, the OCR (Official Cash Rate), which flows through to the trading banks adjusting their interest rates, thereby suppressing or easing spending pressures.
Labour claim it would be better for us to be paying the equivalent of an interest rate rise into our own super funds than to the banks as higher interest, and in turn the Reserve Bank would leave the OCR alone, therefore making our NZD less attractive and keeping the exchange rate down, to the benefit of exporters.
Most comment in the press has been favorable so far with the main argument against being that the major reason for those not in a super scheme already is that they cant afford to, and being required to would be a hardship.
My initial reaction was that it'd be a shots eye employers would be mugged into making up the shortfall in any case, on top of, and including, the employers contribution, when already we're facing the minimum living wage argument.
Really, the economy's all about confidence, or otherwise, in spending/investment patterns.
I dont know how other employers feel about the current situation, but I'm tentatively moving back into employing after five or so years working the farm solo. Any rocking of the economic boat now is depressing, just when I'm starting to see the benefits of having another good pair of hands around the place.
Other misgivings I've got about moves around super schemes:
- Australia's often touted as a shining example with its compulsory super, but you couldnt say its been any benefit to that country's balance of payments or house prices, even with their capital gains tax, which incidentally Labour include (a move into capital gains taxing here) as part of this latest package
- Generally, I dont believe in anything other than own choice for investment decisions, lessons after the investment house decisions of the last recession are easily forgotten, and futhermore, I wouldnt entrust any investment of mine to government control. I opted not to be in Kiwi-Saver. The best investment any of us could make is into debt reduction, and trying saving while you run any debt is plain nuts.
- Neither do I think any policy wonks are capable of pulling the economy's levers at the right time, and for right reason
- Every action has a counter-effect. Taking a few dollars out of wage packets will probably increase demand for welfare expenditure. Keeping interest rates down depressess returns for those who have saved in, and rely some on bank deposits for their fixed income
- Just who's going to benefit here? People on benefits dont have an "employer", so they wont get an employers contribution, but I guess us general taxpayers will stump that up somehow. The government tops up contributions to those who are making $20 weekly Kiwi-savings by a further $500, so much like Working for Families, its a middle class tax grab/benefit. Just the effect the left-wing want I guess.

Give Labour points for trying I guess......
but I dont think it'll cut it.
One letter to the editor in yesterday's Dom suggested it would be better for the super surcharge to be directed into the saver's own mortgage principal, rather than into Kiwi-Saver, where it will only be fueling share-market prices.
The NZ share-market does suffer from being too small, and again the Labour/Greens opposition to the Govt floats of 49% of power generators defies logic.
And lastly, we've had a low OCR for a few years now but its done nothing to lower our exchange rate, there are other forces at play outside of the range of our internal economy, mainly the stability of the NZD's appeal to international investors.

Robust economies are all about "confidence".
The further governments keep their hands off the levers the better, far as I'm concerned.
Posted by john@waione No comments: