Time for the bulls to go out, early Dec mating gives us an early Sep start to calving.

I've drifted off calving earlier, an extra month just gives that bit extra breathing space around the seasonal grass growth pattern. Having calves a month live-weight behind is a small price to pay for better herd well-being, and less stress on the Management.
The winter-saved calving paddocks, closed from Jun 1st till Sep 1st, give me time to finish a few more lambs beforehand, the block grows 5-6000 dm by Sep to put the cows on for calving.
Meanwhile they've run out on the hills till end Jun, come off them before they do too much pug damage into the sidling wintering block, where they'll get balage if they need it, 2 months there, then into the calving block. 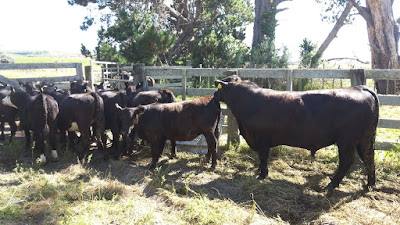 So here's 1418, home bred 2yo bull, introduced to his yearling consort. You'll see a flash of white on the heifers, that comes from a Hereford I used over 10 years ago, the odd white head and foot lingers. Apart from the Hereford, haven't used an outside blood bull in over 20 years.
The herd isn't on an official recording system, I keep my own records, and I think things are ticking along quite well.
Here's why.....
Nessa Carey's Junk DNA and The Epigenetics Revolution move one to the view that "what you see is what you get" performance, unadulterated by correction and heritability equations could in fact be the best thing for breeders to be chasing. That outlier corrected out of the hunt by BLUP, could in fact be the individual with the epigenetic modulation of RNA expression to take the flock or herd to the next level of production.
I've devised my own system of cow lifetime production measure, based on mean annual ratio of weight of calf weaned, with penalty of zero for barren, 0.5 for wet/dry, and 0.75 for calf died.
One thing sticks out like the proverbial....
If there's one selection criterion a commercial breeder can hang his hat on, I think its early calving. These cows inevitably have the heaviest calves, and will be the most likely to do it again next year.
I have a selection index for young stock that adds this dam performance to the mean weaning and yearling wt ratio.
Works great......
1418 was 124% for his wng/yrlg ratio, and his dam 114% lifetime calf prod, 238% index.

Email ThisBlogThis!Share to TwitterShare to FacebookShare to Pinterest
Labels: Cattle 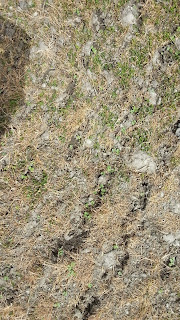 First run with the new Walco 6.75 spreader.
Pleased to report it spread as accurately as the handbook settings said...., I was doing 40kg/ac DAP, 12 metre swath at 15 kmph.
A walk around the paddocks after showed distribution was happily satisfactory.
Got the same good result putting some urea on the paddock closed for Jan hay.
The bin will hold 1/2 ton no problem, but I had to work out a suitable driving technique, its not really wise to be doing turns at 15 kph with a load on the back, specially when I get up on the hills later on. Using the foot throttle solved the problem, slow down for the turns.
The handbook said work round and round for best spread, but with the GPS set on A to B, I prefer working in lands with a single run 12 metre headland across each end of the paddock. 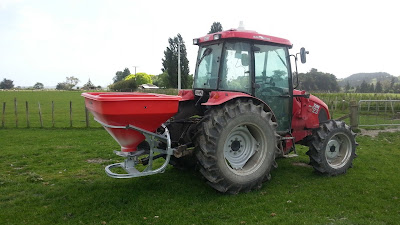 Wasn't all sweetness and light however.
Real mission to mount on the tractor. I had to use outside extension pins to match the TYM's CatII linkage arms, and even then the width dosent match all my other CatII gear, so I'm going to have to frig round adjusting the shackles swapping between machinery, all this made worse by bugger all space between spreader bin and tractor, a frustrating squeeze for a bloke my size.

Bit of a bounce on my OD to fit the capital purchase in, but I got this idea, instead of one humungous annual fert bill, I'd do smaller one to three monthly bites of the cherry, as finances allow.
The 1/2 ton capacity allows for getting fert in Ravensdown's 1/2 ton bags, or, I can get bigger amounts in bulk, and load it with the old Same and bucket.
Posted by john@waione No comments:

Worth a look by all livestock breeders, cattle or sheep.
This movie, set in Iceland, tells the story of how a farm animal disease epidemic can affect us on a personal level.
There's a few bloopers in here that'll go right over the head of the average townie, but by and large its a close enough to the bone depiction of what we might have to face if border protection systems fail us, and....., how some of us might react.
She's a pretty tough environment to farm in up there, magnificent landscape nevertheless.
So were the sheep, must look up the breed, sort of like a long-woolled Texel with horns.
(Actually, they're Icelandic Sheep!)
Salute to the sheep-breeders of Iceland!
Posted by john@waione No comments: 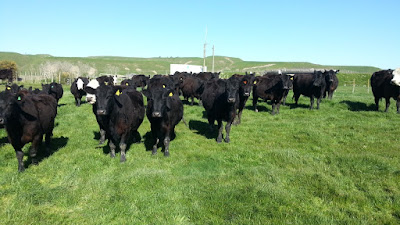 Well........ we made it
Due calving date just round the corner, and the cows onto saved pasture yesterday.
They've come off the wintering block in good order, actually put good amount of condition on, and have only fed balage last couple of weeks.
Major cost has been one old duck broke the tractor door as she brushed past when the mob thought it might have been a shift day rather than the start of silage feeding. The door literally exploded in a shower of glass, I know who the culprit is, #605, she's still got a layer of glass chips stuck to the poron patch. $1800 for a replacement door. After drumming into Rob, keep the effing door shut, this one happens under the Boss's watch.....
Had an early morning tractor drive into town this morning, 18km, had Central Glass fit the new door for me, all done in 20 odd mins, lot warmer drive on the way home.
Closed 1st June, the calving block's sitting at about 5-6000 kg dm/ha, with a prior dusting of causmag applied day before.
Nothing elaborate about the management, 2 mobs of 30 cows on 12 acres each, fed off in 3 acre breaks will get through to end Oct, urea applied as they move off the earlier breaks if needed.
Hard to believe things are normalising, after all the disruption since the flood.
Sleeping much better at nights.....
Posted by john@waione No comments: