Well… this is starting out pretty much a word for word of last year’s reminder, to let you know the rams are coming along nicely and ready to go end of month, through early Feb, after BV update following weaning input…, usual story, only the top 50% reach this stage.

Even so, I’ve gone and exceeded sales expectation by keeping close to 100, so there’s plenty to go round. I’d appreciate an indication by email, text, or phone, if you want in on this lot.

All the usual traits still included in the flock selection bag, including all-important FE resistance.

The co-vid lockdown scuttled getting the 2th ewes GGT blood-tested before last mating, so I’m having to rely on their inherent ability to provide cover, not that last autumn was such a great challenge year to identify the weakest of just this one age group anyway.

I’ve always considered a dry December was a necessary pre-cursor of a high challenge season, 2019’s hardly dry December yielded 112mm rain, and going by the 168mm Nov and 142mm Dec just past, and yesterday’s 40mm downpour, we shouldn’t be bothered much by FE this autumn either.

I’ve made good on my indication last year, of getting hold of a hand-held gas analyser, $1000 imported direct from the Chinese manufacturer, and deploying it like a breathalyzer, have done the rams three times since last July for their methane emissions. 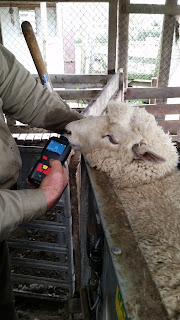 You’ll recall…, us livestock farmers have been charged by the Climate Commission to make an absolute methane emission reduction of 10% on 2017 livestock numbers by 2030, and an as yet un-finalised 24-47% reduction by 2050.

I’ve seen enough with this gadget we can do that easily. Just by culling the worst 10% of the sale rams, the methane credential of the remainder improves by 8%, so I’ve culled them.

And just like the GGT gateway I put on 2 tooth ewes for FE before they get into the recorded flock, I’ll be doing the same for methane emission.

Lower emitters are also the fastest growing, or rather it should be looked at the other way round. The highest producers in whatever trait, growth, wool, lamb production, are the lower emitters.

In effect, the performance demands breeders have put on our sheep and cattle for the last 50 years have been an “all roads lead to Rome” syndrome.

The Greenhouse Gas Research Consortium figured a 1-2% annual genetic gain in lowering methane emission was achievable, and I’d agree with that.

I’ve found too, daggy sheep are up to 50% worse emitters, no need to be reminded about dagginess this year!

By now you should see where this is heading…

Apart from the whole accusation that livestock farming contributes nearly half of the national GHG emission profile being contestable garbage, and that measuring methane may or should be a wild goose-chase given its short life in the gas cycle, there is a more subtle issue at play. Simply that, higher producers are more efficient utilisers of feed, a greater amount of the carbon and hydrogen they ingest with the starch they harvest is getting converted to protein, and a lesser amount exhaled and eructated (burped) as CH4, (methane).

Vice versa with the poorer producers…, or the daggy.

Concomitant with that, I’ve measured these sheep off a standard rye/clover pasture, and off the red clover paddock, and as expected the emission profile off the higher quality feed is in the order of 15 to 20% lower/better.

So, we do have two approaches up our sleeve, breeding, and feed quality, and fie on those Luddites who chased the gene-modified low emission grass research off-shore…, simply foolish.

I’ve written up what I’ve done and its on my website, waione.co.nz, click on the blog link with the jeep and dogs, if you want to read further.

All the rams have a methane emission score, and I’ll be using the best score ram in the stud each year from now on.

Anyway, back to the gas analyser, lots of fun…

Climate alarmists complain about atmospheric CO2 climbing from 350ppm to 400ppm, but I can set this machine pretty much anywhere on the ground and get readings of 280 to 320ppm, so I’d argue vehemently us pastural farmers aren’t getting the recognition we deserve, our grasslands are actually pulling CO2 down from those 350-400ppm levels.

If anyone says, that’s not what the science says, I’d say, what science?

Who else is putting a CO2 meter in the grass? I bet David Parker isn’t.

On top of this, if livestock agriculture’s reducing methane, we’re also bending the national CO2 curve down from its straight-line 100 year ascent.

The biggest laugh I get from the analyser is to shout “extinction rebellion” down the spout for 20 sec. The CO2 reading hits 3000ppm no problem. Dave the Vet jokingly remarked, 4 blokes would be doing more for the planet if they shared a ride in a car, than they would riding bikes to work.

Mind you, the tractor shoots the CO2 reading off the clock, >10,000ppm at the exhaust outlet, full chat engine working revs. That’s only an hour or so per ha to direct drill a crop, which ha then resumes sequestering the CO2, 24/7. I’ve had the meter show 280ppm on the glyphosate prepped ground directly behind the drill. 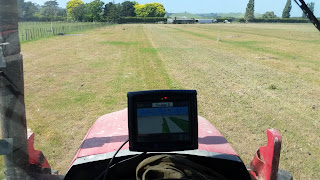 280ppm CO2 in the stubble behind the drill, where’s it all going?

But the people who say livestock farming needs to give way to vege growing, with all its mechanical input requirement compared to livestock, need to carefully reconstitute their argument.

At the end of the day, we’re all food producers, the bigger issue is, if world population keeps growing the way it is, food demand’s going to exceed supply faster than we think.

Beef & Lamb NZ, with the back-up of Auckland University School of Science, who maintain NZ livestock farming is better than 90% carbon neutral have got it right as far as I’m concerned.

All I’ve touched on here is the progress available through smarter breeding and cropping, still dosen’t take into account the tree and riparian planting we’ve done, or will be doing, and still won’t be given credit for if not in the pe-defined contiguous one ha block.

Wool…. I haven’t got any answers.

Had been paying my way with fleece weight exceeding cost of getting it off, up till the season just past that is, but I’m running with the common herd now.

There are some wool product ventures on the horizon, but no across the board contribution to price lift in sight.

I had set on a path to fining up my clip, but there’s been no price differential achieved, and a loss of fleece weight threatens sufficiently to bring about a reverse gear change.

Well…, that’ll do for now, other than to mention it’s Waione Coopworth’s 50th Birthday this year, 50 years since the flock first registered under the one same guiding hand.

I’d like to think the brains behind the hand, and the sheep have improved and progressed somewhat in that time. I doubt another 50’s possible, so get in now and get some rams while the going’s still good!