A wise man once told me, “there’s nothing new under the sun, whatever you’re doing, there’ll be someone, somewhere…..”

This isn’t a scientific discourse, so I’m allowed to put my citations, and resultant comment up front, which I hope will go some way to explaining the course/s of action I took in setting about this evaluation.

If you want to delve deeper, Google “pubmed.gov” then in the search box, type in the citation code. There’s a little box to the right of the paper subject header that says “PMC Full Text” which in some instances you might need to click on to get the full paper.

A Review of Enteric Methane Emission Measurement Techniques in Ruminants

RC (Respiration Chamber) – Animal in container full-time, regarded as ultimate because it collects total flux, (dung, farts, urine etc as well as respired), disadvantage said to be, its un-natural, not reliably reflecting animals emitting differently to what they might when outside.

Green Feed – Similar to above but outdoors with a bait station to lure the animal in, has high between day and animal variations, depending how long the cow stays in station.

Sniffer – Utilised on dairy cows feeding while milking, when they put their head into the feed-bin. Same infra-red CH4 detection as above two systems, but dosent measure total flux, only respiration, and is less accurate between animals because no control where cows head is relative to sensor. However, authors mention, respiration does provide PREDICTION values, so keep that in mind for NS400 implementation.

Ventilation hood or Face Mask – Both have a time/logistics problem as do RC and GF, either a hood/mask for every animal, or one you have to change from animal to animal, which would carry an additional problem of vacating the hood of gas residue from the previous subject.

PAC (Portable Accumulation Chamber) – What we’re being offered locally by AgResearch for 84 animal x 3 week repeat survey service. PAC has advantage over RC in that animal confined for shorter time, up to one hour, but for the still not inconsiderable logistics involved, dosen’t include flux as comprehensively. Zhao et al further say the results don’t correlate at all well with RC, possibly due they say, “different aspects of genetic traits”.

Values obtained by RC said to have the highest h2 of all systems.

IPCC, for GHG ruminant emission mitigation considerations, prefers the RC method, maintaining CH4 measurements are of little value without knowledge of feed intake, which can be best controlled in the RC system.

Included here for interest, Jonkers et al, including among the et al, Shackell, Dodds, Knowler, McEwan, this work likely contributing to the MO of the methane testing service currently offered local breeding industry. They put h2 at around 0.16 for PAC and 0.20 for RC.

NS400- type handhelds offering a “breathalyser” approach, not included in the above survey, but following points pertain:

- With animals fresh off natural environment/pasture, given the above Sniffer comment, we can assume the predictive snapshot. This comment also supported in the following citation:

H4 readings partitioned into respired and eructed (belched), (see their Fig 1 graph for yourself, copyright prevents me from inclusion here).

Interestingly, this paper was not about GHG emissions, but focussed on feed conversion efficiency.

They say h2’s were small, (0.1), and not sure, but I think established via LBW on one generation of progeny. However, they say breeding on reduced CH4 emissions, (especially eructated), contributes to genetic improvement in that trait.

They used mini-peaks of respired and eructed CH4, and maintain such separation is reasonable physiologically.

Ewes with low CH4 during respiration reared heavier lambs, and simultaneously, were associated with higher EBW.

NS400- I read this stuff after we’d done the first trial runs with the detector, carried out on 200 ram hgts.

The NS400 allows setting for recording interval and I had elected for average CH4 over 10 and 20 second intervals, instead of the 3 minutes as in the above trial, and assuming that an average of ppm values might suffice.

As the Reintke Fig1 graph shows, respiration CH4 levels are quite constant, and I found this to be so also, even given the shorter time interval I used.

Importantly, I did find significant difference in average respired CH4 levels between sheep with these shorter intervals, and such difference would be emphasised if the peak values as indicated by Reintke were used instead of average.

We struck a frequency of somewhere around 5% of the ram hgts where eructation occurred during the 20 seconds, which shot CH4 well over 1000 ppm, at times up to 3000 ppm.

Switch-off and re-boot of the detector was needed to clear the residual CH4, the 60 second boot-up process includes a 45 second pump activation while holding the instrument in “fresh” air.

Consequently, I favour a shorter read interval (10 seconds) for the following reasons:

- the NS400 attains a steady “read” within the first few seconds

- sufficient between sheep difference achievable within this time

- shorter restraint time, better all round for both sheep and handler. 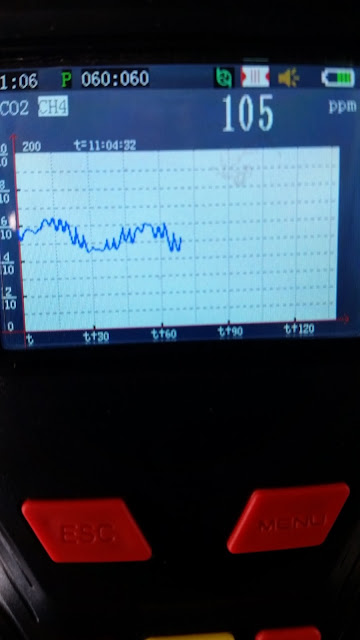 We thought we might encounter some taper off in CH4 with standing time in the yard, higher CH4 values were obtained in first hour.

So here are the scatters for the pasture and clover sessions: ppm CH4 up the side, and time across the bottom, in number of sheep, corresponding to 100=1 hour. 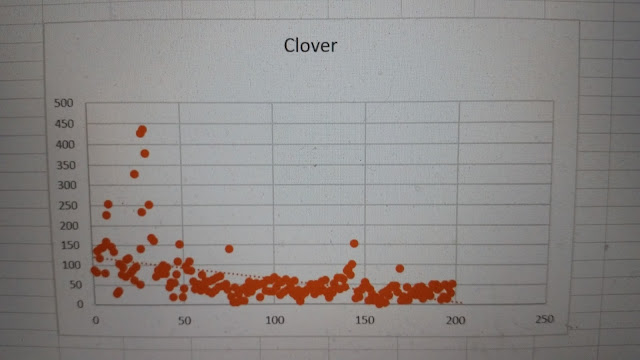 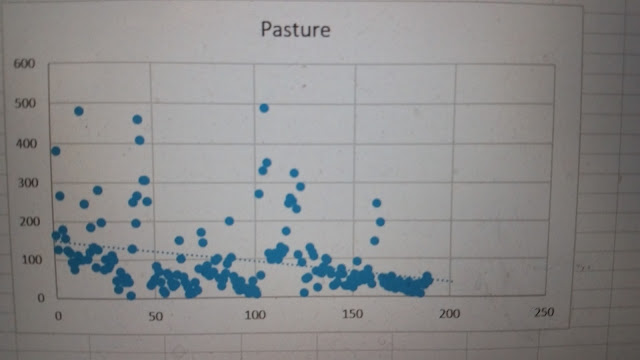 I suppose unsurprisingly, the CH4 settled fairly quickly for the clover, consistent with it being a better quality, more highly utilisable fodder, while off the rye pasture there was a longer tail.

The trend lines were more consistent than I thought they were going to be, but looking at both scatters, a half hour stand-time (=50) might be appropriate.

Couple more citations worth a read:

Genetic and environmental variation in methane emissions of sheep at pasture

200 ram hgts run through the Racewell squeeze, 100 per hour.

Dual - showing both CO2 and CH4

Single – showing either or as pic below

Graph – as Page3. tracks readings over whatever gas and time period set. 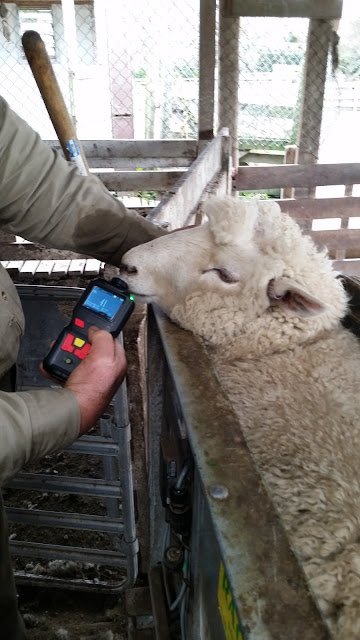 I tried 5, 10, and 20 second timing periods, and used the final ppm indicated at period end. After some long-hand calculation I established this number was the ppm read at close of scan, not an average over the time period.

Any reading over 500ppm regarded as an eructation, and excluded from the summary. Readings I felt were influenced by an eructation in the previous sheep also excluded. While taking readings it is easy enough to tell if this is happening, and in future, will shut down/re-boot to clear the pump, if necessary.

However, would expect in future to avoid this with a short 10 sec read time.

To arrive at a usable CH4 factor for each sheep, I averaged the CH4 readings taken per sheep off both the rye pasture and the red clover, and rather than use a deviation from the total mean, I calculated a CH4 ratio based on the mean of each hour, a sort of cheap and dirty regression to account for standing time, (don’t laugh, it worked!)

There’s no adjustment in here for birth rank which might show lower emitters in better light, but I think the best I can say at this stage is, higher performing sheep are kinder on the environment.  High production, lower emission is a useful association, but limited by how big do we want our sheep to ultimately be. Efficiency at a fixed weight is a more ‘noble’ aspiration. My own genetic trend graphs, approx. 5kg LW12 and 0.2 kg FW12 in the last 8-year generation turn-over, equate a 1-2% per generation improvement in CH4 emission, based on production gain alone.

Looking at Dag Score, the small proportion of dirty sheep was hardly sufficient for robust comparison, but we noted a 4% CH4: advantage no dags vs any dags, (1.00 vs 1.04), and that the really daggy handful of score 4 and 5 were 1.51, ie. approx. 50% worse emitters/inefficient feed utilisers.

Quite a difference between sires, but not necessarily production related except for Sire 2. When all factors affecting trait inheritance considered, individual intake or gut biome for instance, one can only speculate at this stage on heritability of energy conversion to bodily gains via this method of measurement. More data, over more time needed.

The NS400 can make a reliable contribution to the breeding tool-kit, given that all ways I’ve looked at the scenario, in what should be regarded as quite a small snapshot, still gave results consistent with themes in relevant literature.

This applicable also when considering the effect of different feed species illustrated here with the difference in emission profile between rye mix pasture and clover, and which could, by extrapolation, exist with other feed crops like chicory, plantain, and brassicas.

Incorporation of methane measurement into a breeding program would demonstrate a will to positively engage in GHG mitigation, and the contribution should ultimately be measurable. However, given the positive relationship between higher production and lower CH4 emission, performance driven flocks and herds have indirectly been doing the “right thing” by livestock GHG mitigation for at least 50 years, (here in NZ).

In a scenario where h2 is a low to moderate, 0.1 to 0.2, culling lower performers can lift the population mean quickly. Removing the bottom 10% of this trial sample improves the remainder mean CH4: by 8%.

For myself I’ll implement a worst CH4 performing 10% cull to my sale ram and replacement ewe hgts, in line with what I apply to all traits, and will be looking for the best male to retain as a stud keeper. I’ll be basing emission performance on two or more observations in the first 18 months of age.

As with all new technologies, the more you use them, the more uses become apparent, you can’t beat measuring stuff.

The NS400 fits that task for the practical breeder pretty well.

Email ThisBlogThis!Share to TwitterShare to FacebookShare to Pinterest
Labels: Sheep, Tools and Technology